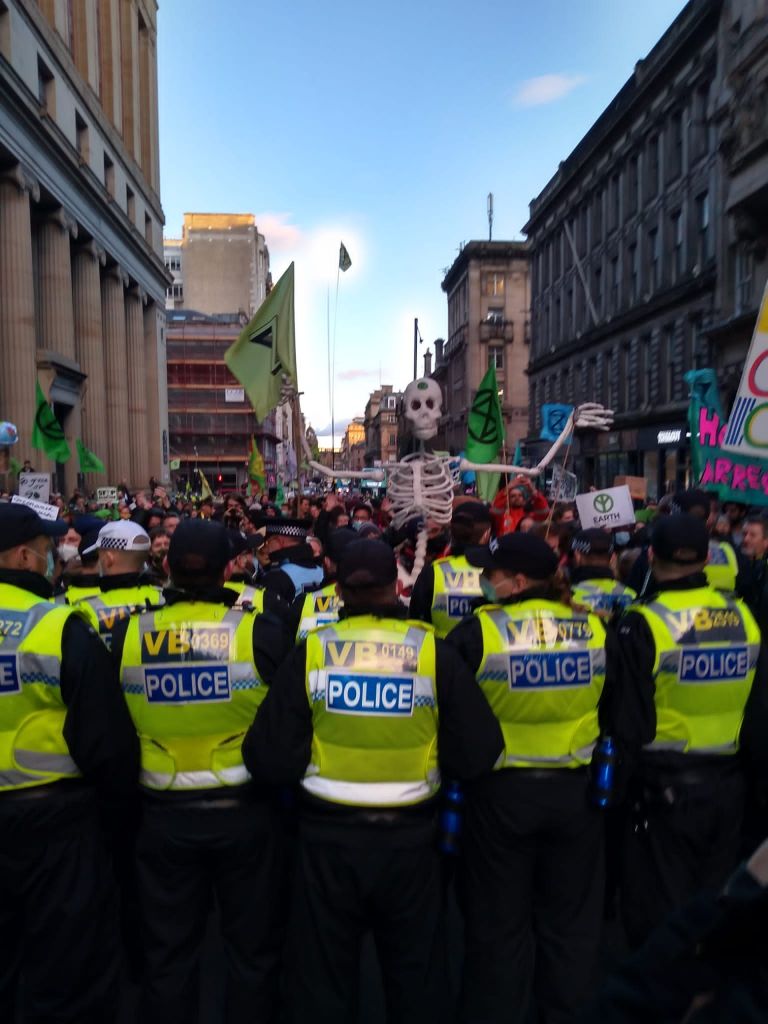 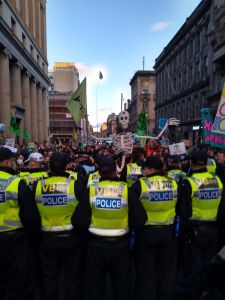 One-man protest: I was in Glasgow during the first week of COP 26 and encountered several demonstrations including two road blockages instigated by Extinction Rebellion. The police were out in force.

By comparison, the police appear to have been absent from the protest about the impacts of salmon farming. Not only were the police absent, but also any protestors were absent too. In fact, this was a one-main protest by long-time campaigner Don Staniford. I can assume that he was on his own as he had to resort to posting selfies of the occasion on Twitter. 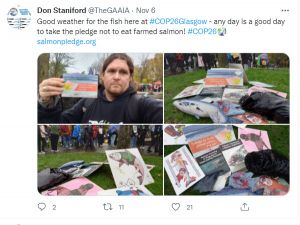 Interestingly, Mr Staniford made a presentation at the Alchemy Experiment in Glasgow on Monday 8th. He has subsequently made no mention about it. Maybe no-one turned up to listen!

Glasgow was full of protestors, protesting over a range of issues. However, even though campaigners make out that salmon farming is one of the greatest environmental problems affecting out planet today, none seemed to think the issue of sufficient importance to travel to Glasgow to make their point known.

I have said this previously, that the vocal minority of anglers, NIMBY’s and the very few environmentalists are just keyboard critics, whinging and moaning from behind the safety of their keyboard, lacking any ideas of their own and just retweeting or repeating someone else’s views or if they have nothing else to say, attacking those who are prepared to stand up to their nonsense.

COP 26 was an ideal opportunity to have their views known. Instead, they relied on the extremely misinformed TV celebrity Chis Packham to make a point on BBC Radio Scotland. He said it was time for the industry to restructure and for employees to retrain to other roles. No doubt, they could retrain as a natural history TV presenter like Mr Packham!

Missing Salmon: It’s not just salmon that go missing, so it seems do tweets. On November 5th at approx. 4.45 pm the Missing Salmon Alliance tweeted the following: 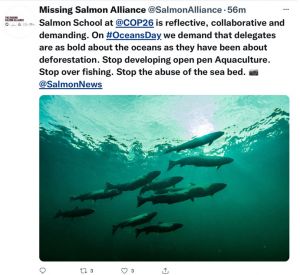 A day or so later, the tweet was removed. I cannot think why?

I am repeatedly told that whilst Salmon & Trout Conservation are perceived to represent the extreme views on salmon farming, I am regularly informed that the rest of the wild fish sector are moderates recognising that salmon farming is just one of a range of pressures impacting wild fish. I have never been convinced. My opinion is that the majority of the wild fish sector are equally critical of the salmon farming but are just happy to let S&TC make the noise and take the flak. Now the Missing Salmon Alliance have come out openly stating that aquaculture development should be stopped, which seems to confirm my view. However, having posted their tweet, they clearly had a rethink and had it removed.

My opinion on the wild sector will only change when they are prepared to have an open debate rather than speaking only to those who are willing to agree with them or don’t know enough about the issues to disagree.

When are the wild fish lobby going to accept that salmon farming is not the problem and focusing all effort towards addressing their concerns will only deflect attention away from the real reasons why salmon and sea trout are in such trouble?

Missing salmon 2: Fisheries Management Scotland are typically portrayed as one of the moderates of the wild fish sector. They certainly appear to be present at most discussions on the future of wild salmon including SIWG. Prior to COP 26, a news item on their website reported about children from a local school visiting the Clyde with the Minister and the sculptor Joseph Rosanno, who oversaw the salmon school installation. The news item included comments from participants including Dr Alan Wells, Chief Executive of Fisheries Management Scotland.

He said, “It was wonderful to welcome the Minister to this inspiring event. We need to redouble efforts to protect freshwater habitats, through addressing barriers to migration and providing shade from native trees. We need to improve water quantity and quality by tackling over-abstraction in our rivers, preventing pollution from sewage and agricultural run-off, and we need to reduce losses of salmon in our rivers, coastal waters, and the open ocean, through addressing the impacts of fish farming, predation, and by-catch in commercial fisheries. We look forward to working with the Scottish Government, through the wild salmon strategy to make this happen.”

Yet again, salmon farming receives top billing as one of the pressures affecting wild fish in addition to predation and by-catch. However, whilst Dr Wells says that there is a need to reduce losses of salmon in our rivers and oceans, he fails to mention the one obvious reason why fish are lost is through exploitation.  In 2020, (I won’t know the data for 2021 until at least April 2022 because river proprietors seem unable to adopt a more up to date reporting system, although they expect salmon farmers to report their data at least weekly) the wild sector oversaw the deaths of 3018 wild salmon and a further 1565 wild sea trout, all of which were returning to rivers to breed. Perhaps, if Dr Wells wants to ensure the future of wild salmon and sea trout, he should first stop this unnecessary killing of fish for sport rather than pointing the finger at others.

Salmon School: The Missing Salmon Alliance and their associates have been tweeting photos of the Salmon School installation hanging above the dining/relaxation room at COP 26. The photos all seem to have one thing in common. No-one pictured is looking up at the installation. Equally, I have not seen any mention of it from anyone outside the wild fish sector. 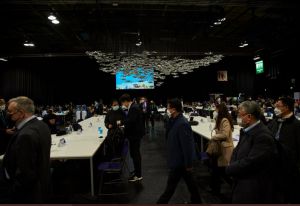 No doubt, the wild fish sector will claim the installation to be a great success, but I am not so sure. Firstly, it was supposed to hang above the area where interview took place, but it seems it was moved to a less impressive venue where it certainly was not seen by any of the world leaders or their retinues. Secondly, in the wider scheme of things, most of those attending COP 26 probably couldn’t care less whether salmon anglers have fish to catch or not. There were many more issues of greater importance to address than the concerns of sports fisher people.

The installation did get coverage on BBC Radio Scotland but focused more on how it was made rather than the issues they hope it would raise.

It will be interesting to hear the assessment of whether the installation was considered value for money in the fight to safeguard the future of wild salmon. Of course, the MSA have so far avoided mentioning how much they have spent on this venture. I suspect it is a lot more than anyone might guess. The question is whether the money could have been better spent on more research to find out what is happening to wild fish because I am not sure anyone really knows other than point the finger at other such as the salmon farming industry and predators.

Daily Record: The Daily Record asked 81-year-old retiring ghillie, George McInnes, what is causing the decline of wild salmon. He replied that on the west coast, it is undoubtedly salmon farms which produce huge numbers of sea lice which attach to juvenile salmon and literally eat them to death. Rivers in the east coast however are different because there are no salmon farms there. Instead, there are huge numbers of predators such as seals, cormorants, goosanders, and dolphins all of which eat large numbers of juvenile and adult salmon. Mr McInnes added that there used to be such a thing as restoring the balance of nature with culls, not total obliteration of some species when their numbers grew out of control. Something is also happening to salmon out at sea. The fish could be taken illegally or are suffering the effects of global warming, but the answer needs to be found soon before Atlantic salmon stocks become more endangered. The economy of the countryside depends on sports like angling and if there aren’t enough salmon, then ghillies will lose their jobs as well as other jobs in hotels and local businesses that depend on stocks of salmon being restored to Scottish rivers.

For the last twenty-nine years, Mr McInnes has been head-ghillie on the River Tay’s Ballathie beat. His retirement is not the newsworthy aspect of this story. What makes it newsworthy is that Mr McInnes reckons he has caught a staggering 20,000 salmon throughout his life. This huge number far exceeds that of Robert Pashey, known as the ‘Wizard of the Wye’ who was credited with catching 10,000 salmon between 1906 and 1951.

Mr McInnes best catch of the day was 31 fish although it wasn’t from a whole day’s fishing as he had to pack up to go to work. His best weekly catch was 113. Mr McInnes reputation as an efficient angler meant that visiting anglers regularly invited him to fish with them. He was famous for hooking, playing and dispatching fish in the middle of the river stringing them on a rope tied around him so he didn’t waste fishing time going to the bank to land them.

The Daily Record wrote that George McInnes is retiring as salmon catches on the Tay have fallen off a cliff.

Doesn’t it seem odd that there is no mention that this excessive slaughter of fish might have something to do with the fact that salmon numbers have ‘fallen off a cliff’. It is not just Mr McInnes, but all anglers who have contributed to removal of around 5.9 million wild fish from the rivers around Scotland. Its not surprising that they now wonder why there are no fish left. Its so much easier to blame the salmon farms, the seals, and the goosanders.