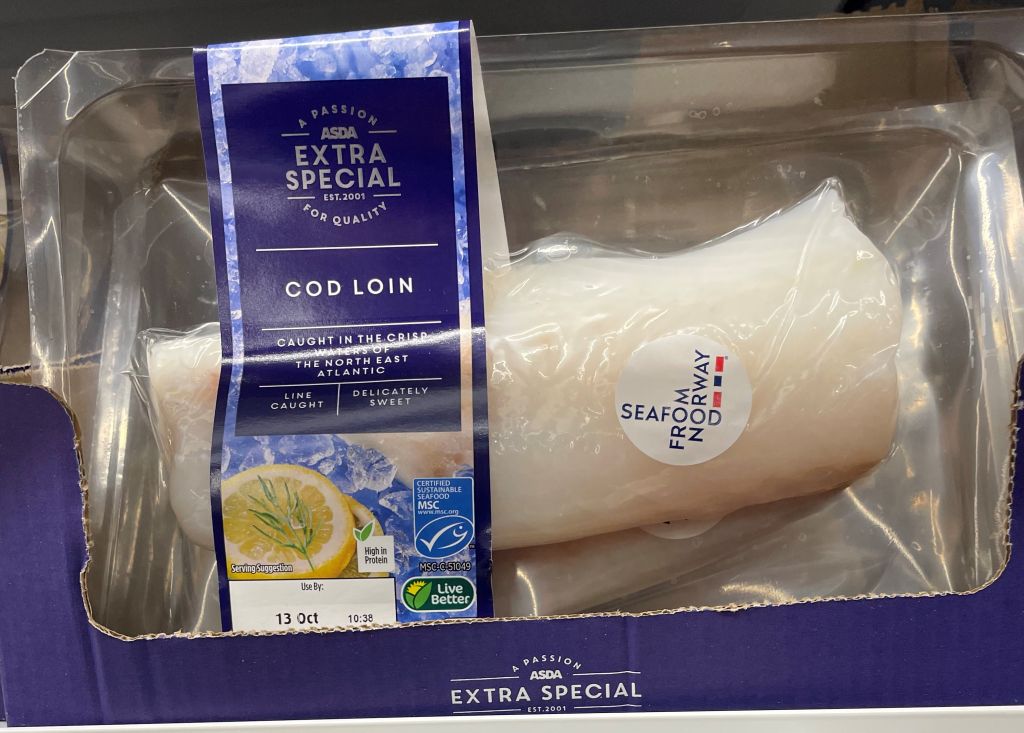 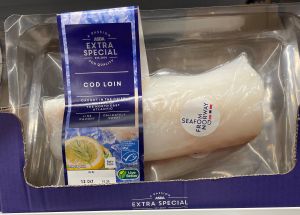 Branded expert: Intrafish recently reported comments made by Acme Smoked Fish’s Chief Marketing Officer at their 2021 Salmon Summit. She said that the global pandemic had put farmed salmon producers in a strong position to go all out with branding efforts. Intrafish continued that in recent years, the market has seen the arrival of Ventisquero’s coho brand Silverside, Kvaroy Fiskeoppdrett’s Arctic Salmon brand and most notably Mowi brand. Teresa Low, a former executive with Hershey’s joined Acme in January bringing more than two decade’s experience of building global brands for Fortune 500 companies. She said that although salmon enjoys a good perception in consumer’s minds as a premium healthy protein, she has noticed a significant lack of branding which she says means that it is an exciting time for the industry to invent the space.

Ms Low may have more than twenty years’ experience with Fortune 500 companies, but in my opinion, she has a lot to learn about salmon and more especially about salmon branding. Branding a chocolate bar, a can of cola or a washing powder is a very different approach to branding salmon. Interestingly, Ms Low’s comments come after joining a smoked salmon company and branding smoked salmon is also very different from branding salmon but in my view attempting to brand salmon flesh is a complete waste of both time and money. I appreciate others would disagree, especially Mowi, but time will tell who is right.

I have not come across the other two ‘brands’ so am unable to comment about them, whereas Mowi brand salmon is available almost on my doorstep. It may come as a surprise to some, but this is not the first attempt by Mowi, in its former incarnation of Marine Harvest, to attempt to brand salmon. Back in the 1990’s they launched Lochinvar brand salmon in the UK, and it did not last long. At the time, the company blamed the failure on the processing plant in Fort William being too far from the marketplace, but the reality was that consumers did not see any benefit for paying more for a branded salmon that looked exactly like any other salmon and especially like the own label salmon it was being sold alongside. This is just as true today as it was then.

Whilst the 1990s are a world away from now, the company has had more recent experience with branding, launching a brand in France a few years ago. This also failed to make an impact with consumers for exactly the same reasons, although the range was expanded to include flavoured salmon. However, similar products were already available as own label.

Mowi will say that this time it will be different as the brand is being supported by a major marketing campaign including TV advertising. Yet, in my view, a costly TV campaign will not overcome the basic issue of the main product being standard salmon flesh, which looks and tastes identical to other salmon flesh. Mowi brand salmon was launched in the UK in Sainsbury’s supermarkets with a 230g pack of 2 fillets selling for £4.50. By comparison, Sainsbury’s own label salmon, which is supplied and packed by Mowi, costs £3.35 for 240g. This means that Mowi salmon equates to £19.56/kg whereas their own label product is just £13.96/kg, a not insignificant difference of £5.60/kg. Is it really worth the extra? Visually, the salmon looks very similar and when cooked together in an identical way, it is extremely difficult to ascertain any difference in taste. 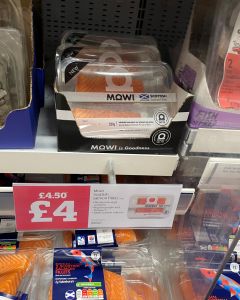 Perhaps, the cost difference, the lack of visual difference or taste is why Mowi brand salmon has been on almost permanent promotion since its launch in Sainsbury’s with a saving of 50p bringing the price down to £17.39/kg which still represents a big price difference with own label but whilst on offer, consumers think they are getting a bargain of kinds and are more willing to give the product a go. As it happens, the Mowi pack has just come off promotion, but I suspect it won’t be long before the price is discounted again.

For Mowi brand salmon to succeed, consumers need to be willing to buy it time after time at its regular price and so far, I am not convinced. In Sainsbury’s Mowi also offer a flavoured roast fillet and a smoked salmon, both of which are also on almost permanent promotion.

Last week, Mowi salmon was also launched into Tesco where it is part of their current 2 packs for £7 promotion equating to £15.21/kg compared to Tesco own label salmon at £13.47/kg.

The Tesco launch is incorporated into the Mowi TV ad which I saw twice during a one hour show on ITV 4 channel this week, certainly not the most watched TV channel in the UK.

The most interesting aspect of Mowi brand salmon is that the company opted for a total rebrand as Mowi a few years ago. Branding with the company name is a risky exercise since any adverse publicity about the company could affect the brand and conversely, if the consumer brand is damaged in any way, it could undermine the whole company. Clearly the brand change was designed to impress shareholders, but in my view, it is the consumer who needs to be impressed because without them, there is no business.

Origin: Intrafish reported that the Norwegian Seafood Council’s (NSC) is planning to undertake the largest salmon campaign of all time in countries across Southern Europe. In total, NSC are planning to spend 40% of their total budget in a campaign covering Spain, Italy and France. These together countries account for about a third of salmon consumption in Europe. The plan is to run TV advertising, social media and in magazines. The main message common to all is the Norwegian origin of the salmon.

Meanwhile, NSC have been running a campaign in the UK to promote sustainable whitefish. Intrafish reported that the Asda supermarket chain will feature ‘Seafood from Norway’ origin branding on its own-label cod and haddock. NSC and Asda were reported as driving customer awareness through a triangle of on-line and in store retail campaigns combining packaging and advertising at point of sale and on social media.

I visited a number of stores and at best, I saw were the NSC stickers on packs. As most consumers have no understanding of the sticker, the campaign, in my opinion, is somewhat meaningless, especially as consumers have no choice. If they want to buy cod in Asda, their choice is own label cod fillet or own premium label cod loin. Whether the pack carries a sticker or not is irrelevant.

Young for Youngs: Salmon Business reports that Young’s Seafood, who account for about 40% of all fish eaten in the UK, have announced the launch of a new salmon added value product to try to appeal to a wider segment of the market and especially younger consumers. The product is Red Thai Infused Salmon. The idea is to broaden the consumer’s repertoire by providing something different to standard salmon. Young’s say that they are trying to become more modern to appeal to a wider audience which could already be nervous about cooking fish and seafood. Young’s point out that consumers say to them that when they buy fish, they then wonder what they can do with it. However, if you add flavour, then you have got half a meal and effectively all you need to do is to add carbohydrate.

This product has actually been in Asda stores for some weeks. It is currently on a 3 for £10 promotion. However, it isn’t really a news story as Young’s have tried to launch branded flavoured salmon packs more than once before. The Red Thai flavour isn’t even new as it is available in other supermarkets such as Sainsbury’s. For me the most questionable aspect of the story is that flavoured salmon might appeal to a wider segment of the market and especially younger people. The sad reality though is that most younger members of the public never visit the fish shelves or counters and thus will never see this product at all, let alone buy it. If we want to encourage younger consumers to eat fish, then the first step is to put the products where these potential consumers will actually see them. Most innovative products have failed for exactly the same reason.

Interestingly, despite their significant presence in the frozen sector, the company has tried to launch Young’s branded chilled fish including salmon, on more than one occasion. However, they have never succeeded in establishing the brand for more than a few weeks.

Lost its sole: This week, BBC TV’s Countryfile programme visited the fishing port of Newlyn in Cornwall where presenter Joe Crowley investigated alternative fish choices. Of course, this subject is not new. I have discussed eating a wider variety of fish in reLAKSation several times over the years. Sadly, nothing seems to change, and consumers stick to the Big Five – salmon, cod, haddock, tuna and prawns, accounting for 80% of fish consumed.

Joe spoke to a local fisherman who said that currently, he was catching mostly megrim sole. When asked if he ate them, he said yes, but his body language suggested different. Megrim used to be exported to Europe, but Brexit has made such exports difficult. Instead, local fishermen want to encourage greater consumption in the UK. As I have discussed previously, they have renamed megrim as Cornish sole, despite the fact that megrim are also landed in Scotland.

Seemingly, since the launch of Cornish sole earlier this year, consumers appear unimpressed. Megrim has failed to appear on fish counters in larger numbers irrespective of which name is used. Currently, it seems to be only Cornish purveyors that are using the Cornish name. Elsewhere the name appears unimportant because the fish are so few and far between.

The Cornish Fish Producers Organisation had done some market research funded by the Seafood Innovation Fund to the tune of just under £30k. The research found that the newly named Cornish sole would need to be processed in a way that is convenient to consumers with filleted megrim appealing more to consumers than the whole fish. They learned that some trial product development confirmed that a value-added product would be popular with consumers but no detail of what sort of product this might be was made available. Certainly, this product development has not yet transferred to the market, but then nor has Cornish sole. This week, one sad example of the fish was labelled in a Morrison’s store as megrim.

The supermarket chain Morrison’s has been keen to promote British fish such as megrim in its stores but inevitably any attempts to promote alternative species usually come to naught as those consumers who do buy fish, stick to the popular favourites. If the sector wants to expand consumption, it will take much more than a change of name.