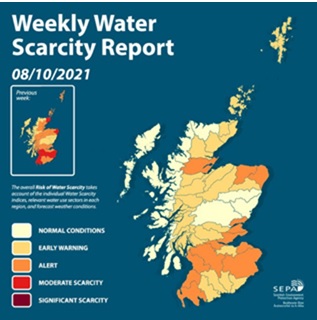 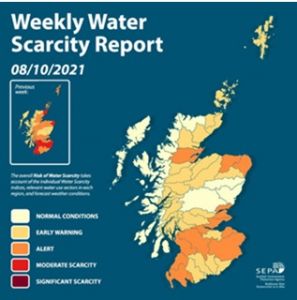 Foot stamping: Salmon & Trout Conservation have issued details of their new position on salmon farming. They say that despite trying to engage with the Scottish Government and regulators, there seems to be no intention to rein in, what they say, are the damaging effects of salmon farming on wild salmon. S&TC say that they have lost patience and consequently they are calling for an end to all salmon farming in net pens. They say that this is the only way they can protect wild salmon.

I can only wonder that since no-one has listened to the blinkered outpourings from S&TC until now, why anyone will listen to their new demands, especially given that SEPA have stated that sea lice from salmon farming are not responsible for the decline in wild fish.

S&TC are like a broken record stuck on the same track. This is because whilst they say that they have engaged with government and regulators, they seemingly only are willing to engage with those who are prepared to agree with their view. Perhaps, if S&TC are so convinced that salmon farming is responsible for declines of wild salmon and sea trout, they may wish to explain my west coast sea trout catch graph. I am still waiting for anyone from the wild fish sector to enlighten me as to why salmon farming is to blame for declining sea trout catches when sea trout were already in decline for the thirty years prior to the arrival of salmon framing to the west coast.

If S&TC are so concerned about the fate of wild salmon and sea trout, why don’t they call for an immediate ban on fishing for these species for sport. Could it be because, despite their greenwashed name, their primary role is still to represent the interests of salmon and seatrout anglers?

Greenwashed: According to the Scotsman newspaper, a stunning artwork highlighting the extinction threat to Scotland’s ‘king of fish’ is set to grab global attention at the COP26 climate summit in Glasgow. The exhibit, which features more than 300 glass fish will be staged in the conference blue zone where global leaders are set to hammer out plans for saving the planet from environmental destruction. The artwork is titled Salmon School and is the work of internationally renowned artist Joseph Rossano. The Scotsman states that the lead partner in bringing Salmon School to Cop26 is the UK’s Missing Salmon Alliance (MSA) a coalition of groups and individuals dedicated to reversing declines in wild fish. 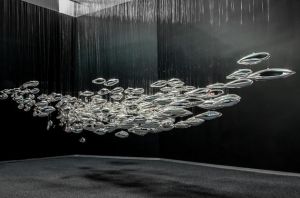 In my opinion, the commissioning of this artwork by MSA is just another example of greenwashing by those involved in wild salmon fisheries to help justify their sport at a time when wild salmon stocks are plummeting towards extinction.

The Missing Salmon Alliance comprises of the Atlantic Salmon Trust, Game and Wildlife Conservation Trust, Angling Trust, Fisheries Management Scotland, and the Rivers Trusts. Salmon & Trout Conservation used to be members, but they were thrown out because they wanted the central focus of the MSA to be towards closing down salmon farms. These organisations all have one thing in common and that is an involvement in ensuring the best possible conditions for salmon, so that they can be caught (and sometimes killed) for sport.

Usually, reports in the press such as the one about artwork such as Salmon School always seems to mention its cost. In this case not. I suspect this is because the cost probably outweighs any benefit that might arise from its installation in Glasgow and most participants will give it no more than a passing glance, let alone understand, its meaning.

Of course, it is essential to limit global warming and prevent rivers temperatures becoming too high for Atlantic salmon, but this is long-term. Action can be taken now to safeguard and protect wild salmon. We can stop killing these valuable fish for sport. We should also better understand the impacts of catch and release to help prevent unnecessary mortality. I have written previously that Marine Scotland Science have the results of a study into catch and release mortality but have so far refused to release their findings. Could it be that wild salmon fisheries are considered more important than having salmon in the wild?

It is time that a decision is taken as to whether it is the fish or the fisheries that we want to protect. Until we do, we will continue to see examples of greenwashing by the wild fish sector as we will see at COP26.

TV special: TV presenter and keen salmon angler, Jeremy Paxman has been busy expressing his views about wild salmon in the press, first in the Spectator magazine and now in the Daily Mail. What seems to have promoted his latest outburst is that he has recently returned from his final fishing trip of the year on the River Tweed. He writes that he has never had a worse season and consequently he believes that he is now seeing the beginning of the end for wild salmon. He says that the reasons for his pessimism are numerous but mainly man made. Of all the numerous possible reasons for the dire straits salmon are now in, it is salmon farming that is the subject of Mr Paxman’s ire. This is even though less than 10% of Scotland’s salmon are caught around salmon farms and the River Tweed which failed to deliver the expected fishing is about as far as it is possible to get from any salmon farm.

Mr Paxman continued his diatribe against salmon farming in the Daily Mail. It seems that his views merit public exposure simply because he is a known TV personality and a salmon angler and for no other reason. Like many other anglers, Mr Paxman’s basis for criticising salmon farming appears to be that it is the most convenient scapegoat available. He simple regurgitates the same unsubstantiated claims as widely spread through the angling sector.

Mr Paxman also bemoans his own situation saying that those who travelled to Scotland this year to fish for salmon mostly returned home dejected because there had been no significant rainfall in many rivers since May and with no water in the rivers, whatever salmon that do return could not get into the river from the sea. Mr Paxman also adds that on the other hand, if you happened to be there when the heavens opened up, then the fish would be too. He says that’s fishing and always has been.

A recent weekly water scarcity report from SEPA highlights that much of the east coast of Scotland has suffered from a lack of rain, which has consequently affected the fishing.

What Mr Paxman did not say was that the week after he returned, the Tweedbeats website reported that an estimated 350-400 fish were caught giving the best week’s fishing of the year. 150 were caught on Thursday alone.

And for those critics of salmon farming, the same week saw 56 salmon and grilse landed from the River Lochy in the heart of the aquaculture zone. One angler caught 15 fish that week. The following week, which was the last of the season, produced another 37 fish with the largest at 18lb. I bet that Mr Paxman would have been delighted to have caught one of those even if it meant fishing within shouting distance of a salmon farm.

Faeces: One of the issues for Mr Paxman about salmon farming is that those fish which don’t die from parasites or disease produce enormous amounts of waste, which accumulates beneath the cages in which the fish are imprisoned, killing all life on the seabed below them.

Sadly, Mr Paxman is unaware that fish faeces are part of the natural nutrient cycle that occurs in the marine ecosystem. There are no mountains of waste under salmon pens as the waste is reabsorbed. Of course, waste does blanket the seabed but in terms of sea area it is even smaller than minuscule.

Whilst anglers and other critics say there is too much waste, New Scientist has just reported that there is actually a shortage of fish faeces in the world’s oceans and seas and this shortage is contributing to shifts in the ocean’s carbon cycle of an equivalent magnitude to that of the impact of climate change on the ocean. It seems that fish produced faecal pellets are one of the most efficient natural mechanisms of carbon storage. However, the rise of industrialised fishing has seen the number of fish in the sea fall. Now a team from the University of California, has calculated that the loss of fish faeces due to fishing in the sea is having a major impact on the carbon cycle.

Perhaps the change from fishing to farming could well readdress this balance. However, in continuing to raise the issue of fish waste, the critics of the salmon farming industry are simply criticising to their own agenda, not to the science.

Interference: I have seen no mention at all about a recent feature on BBC Scotland’s Landward TV programme. This featured tourist sea watching trips from Ullapool into Loch Broom in the northwest of Scotland. The programme looked at how the loch is an ideal place to watch porpoises, dolphins, and seals (although not mentioning the proximity of these sightings to salmon farming) and visitors regular take the organised trips out into the loch. However, locals have expressed concern about the number of visitors who appear to disrupt or interfere with the local wildlife, when they sail out into the loch independently. This said to be usually out of ignorance. Those locals who are concerned about the growing number of incidents are now mounting a campaign to better inform visitors about the best ways to watch the sea life without causing harm. They hope this will be replicated in most west coast tourist areas. Sadly, those who criticise salmon farming for allegedly causing damage to these marine mammals, don’t seem interference by tourists worth mentioning. I can only wonder why not?