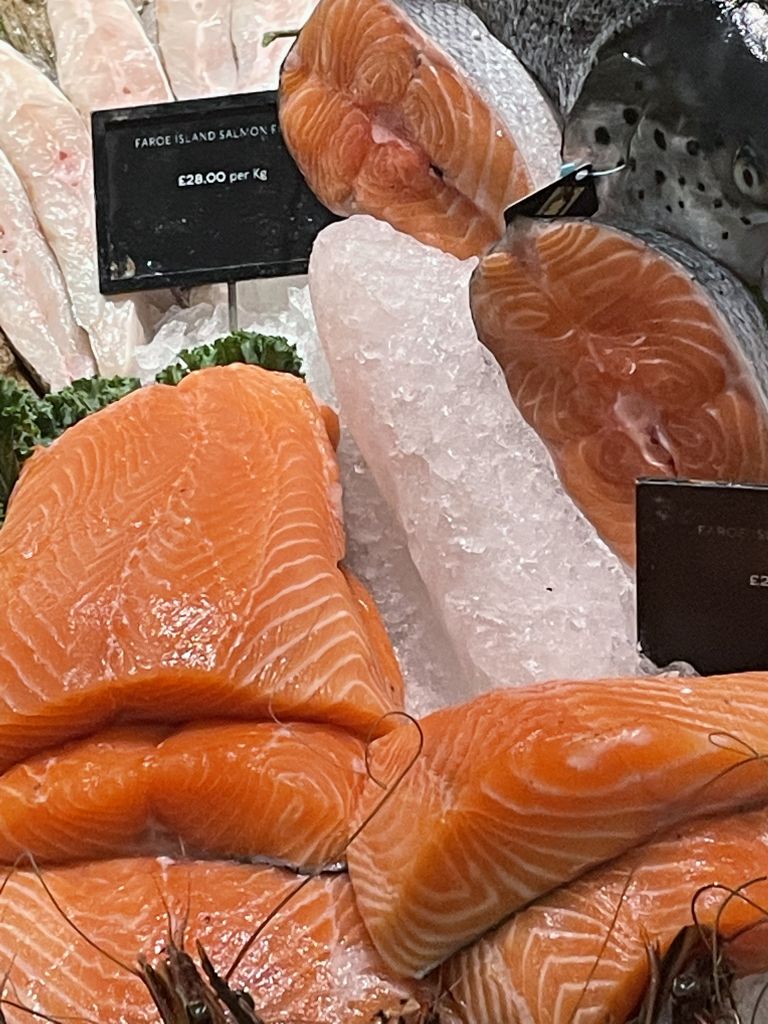 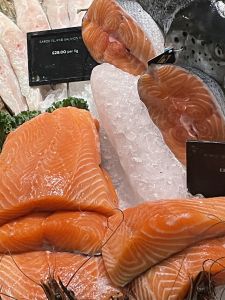 Retail observation 1: A couple of months ago, Bella Caledonia, an on-line magazine reported that Harrod’s Department store in London’s Knightsbridge was selling wild salmon at £245/kg which they say equates to around £60 per portion. Bella Caledonia readers must have a healthy appetite for salmon because a 140g portion would actually cost £34.30. The salmon comes from the River Tweed and because it is illegal to sell most wild salmon from Scotland, Bella Caledonia found out that a small fishery is still operating legally. This is because when Marine Scotland arranged for a ban on netting in coastal waters, they forgot to extend the ban to in-river fisheries. In 2020, a total of 780 wild salmon were caught and sold to restaurants and boutique fishmongers.

Bella Caledonia asked the fishmonger in Harrods who was buying the £63 (sic) portion wild salmon. The reply was ‘rich people’.

Bella Caledonia rued the loss of wild salmon and although blamed a number of factors, focused on just one, which I don’t need to mention.

Instead, I would suggest that whilst there is the odd person willing to buy wild salmon from Harrods at £245/kg, the majority of their consumers, however rich, appear happy to buy farmed salmon at £28/kg for fillet and £20/kg for steaks. Of course, high end consumers like to buy something different from the standard offerings so Harrods currently stock fresh salmon from the Faroe Islands. This does not mean that they ignore Scottish as they have a range of Scottish smoked salmon too.

To put the price of Harrods salmon into context, Waitrose sell Hebridean salmon fillet for £24.99/kg which is not such a big difference given the difference between the stores.

Retail observation 2: Last month there was a media storm because a shopper at a Morrison’s store in Salford posted a picture of a ‘baby’ octopus being sold for just 36p.  The shopper, a charity worker, declared himself heartbroken on Twitter saying that one of the most amazing creatures ever to swim the seas has been moved from its ocean home to our rubbish bin.

The 176g octopus had been priced at £1.41 equivalent to £8/kg but because it was approaching its sell by date, the price had been reduced first to £1.06 and then down to 36p or £2/kg.  The charity worker said that these are beautiful, sentient creatures and we as humans, by putting so little value on them, do not deserve this world. His comments on Twitter received over 43,000 likes which he put down to the popularity of the 2020 Netflix documentary My Octopus Teacher. 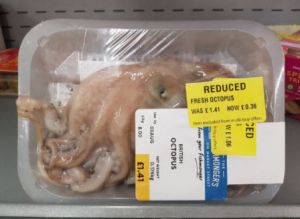 These comments raise a number of issues, not least, the presence of octopus in retail stores. The problem for retailers like Morrison’s who stocked the octopus, is that the message from the fisheries sector is to eat a wider range of fish species and this would include octopus.

If stores don’t stock a choice of fish and seafood, then consumers would be just exposed to the Big Five (salmon, cod, haddock, tuna & prawns) and little else. Yet at the same time, consumers are not going to move off the Big Five unless there is a choice and regrettably, having a choice means that some lesser desirable species are never bought.

Morrisons are one of the few supermarkets still to operate a fish counter. The fishmonger also wraps some of the produce for display on the shelves, as happened in this example. Their recent strategy has been to promote more UK caught fish and whilst I am not party to their sales, it does seem to me that there has been a high level of wastage with consumers failing to be motivated to buy alternative locally caught species.

In response to the charity worker’s description of the octopus as a baby, Morrisons said that this was the most commonly caught species of octopus in Cornwall, which is much smaller than the common octopus.

There is clearly a taste for octopus in the UK, as the last twelve months, consumers have bought around 100 tonnes of octopus. Although it is not exactly a big seller, sales have increased by a quarter over the last twelve months. However, I suspect that Salford is not a hotbed of octopus consumption as it is not an affluent area, even though the species costs just £8/kg. By coincidence, I regularly visit this specific store and the octopus offering was somewhat unusual. The fish counter offers just a relatively simply range of species.

Finally, it is worth mentioning that the charity worker is also a vegan and I have heard him interviewed on the radio and whist the price caught his attention, he equally objects to eating any fish or seafood. Sadly, many of those now objecting to aquaculture developments have a vegan lifestyle. Unfortunately, they seem to think that the rest of us should follow their lifestyle too and stop eating animals. They would be better served by promoting their lifestyle rather than criticising what the rest of us eat.

Retail Observation 3: One of my correspondents has pointed out a recent tweet. It says that one kg of wild mackerel costs £11.50/kg whilst one kg of ‘toxic‘ salmon is priced at only £5.99/kg. The tweet was accompanied by pictures taken in a Morrisons store. 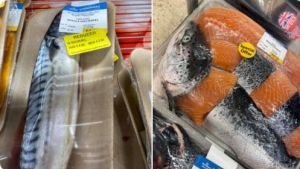 The implication is that salmon farmers must give away their fish at a low price as otherwise consumers would avoid it. Unfortunately, this industry critic has interpreted what was observed in line with typical anti-salmon farming narrative when in fact the truth is very different.

Firstly, as discussed above, the pack illustrated has been reduced in price because such alternative species are not especially attractive to consumers familiar with the Big Five. Secondly, the label states that the mackerel is prepared, whereas whole mackerel usually costs just £6/kg. 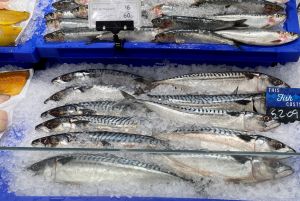 Secondly, the salmon which is sold as a whole fish normally costs £8/kg but as the label clearly states, the fish is on special promotion. Boneless salmon fillet, which is what consumers prefer to buy, retails at £13.99/kg.

Fortunately, the salmon is only toxic in the eyes of critics because the truth is that salmon is the top seller in the UK with nearly 64,000 tonnes sold in the last twelve months. By comparison, only 16,000 tonnes of mackerel were sold. Clearly UK consumers don’t consider salmon to be toxic and that’s because it isn’t. Perhaps, the reason little note is taken of the critics is that because the average consumer understands that it is the critics who are toxic.

Retail Observation 4: Another critic has posted a picture of a pack of Tesco Finest smoked salmon which states the name of the farms where the salmon was grown. The critic then equates the salmon lice data for the same date with the smoked salmon in the pack suggesting that it comes from fish which were then highly infested.

The sea lice data for the farm is taken directly from the company website. At the time, the farm experienced a level of over 4 lice. This was prior to treatment after which the numbers fell to less than one. This is against a background of a reporting level of 2 and an action level of six lice.

Whilst it is easy to assume that the salmon in the pack comes from the same pen as fish under treatment, this is another example of a critic adapting observation to fit in with their own narrative. It is a shame that this critic didn’t bother to read other information on the pack rather than just the site name and the data. The pack states that ‘This product may have been previously frozen and has been restored to chill temperature under carefully controlled conditions’. Smoked salmon is often frozen in order to regulate supply with demand. Just because the date, which is typically a use by date, is current, does not mean that is the same date as when the salmon was smoked.

Apparently, this is not the first time these claims have been posted and I understand that the company involved responded fully at the time. However, as the response was not the answer the critic wanted to hear, it was reposted again in the hope of ascribing to the theory that people will eventually believe what you say if you repeat it often enough. To date, most right-minded consumers clearly ignore these claims since in the last twelve months UK consumers bought 118 million packs of smoked salmon. That is a lot of smoked salmon.