Major concerns: According to the Marine Assessment 2020, stocks of wild salmon in Scotland were below their conservation limit, yet in the same year, anglers still managed to kill 3018 salmon for sport.  This begs the question as to how low the Scottish salmon stock has to fall before the killing of all wild salmon is banned.

The Marine Assessment 2020 was launched just four days before last Christmas which perhaps explains why it failed to generate widespread publicity. The Marine Assessment consists of an online platform that helps assess the condition of Scotland’s marine environment and the human activity it supports. More than 250 scientists have contributed to 183 separate studies. The major findings to date are that:

Progress is being made to reduce the levels of contaminants in the seas.

Climate change is the most critical factor affecting the seas.

Collaboration with all stakeholders is essential to improve the state of the seas.

One of the 183 studies is titled ‘Salmon and Sea Trout’ which presents a status and trend assessment for salmon across all of Scotland.

The red triangle symbol means that there are ‘many concerns’. The trend symbol is self-explanatory. However, neither of these are surprising, but what is surprising is that it seems that little has been done to address either the concerns or attempt to reverse the downward trend. Instead, despite an ever-declining stock, killing of salmon for sport is still permitted.

The assessment states that there has been a decline in the number of returning salmon to Scottish coastal water since the early 1970s but that until 2010, the estimated number of salmon spawning in Scottish rivers has remained relatively stable. These two time-series are seen in the following graph taken from the document. 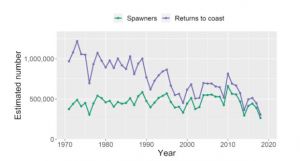 The spawning stock has seemingly remained stable because the number of fish killed has declined both because nets have been bought out or closed down and more anglers now return the fish they catch to the river. 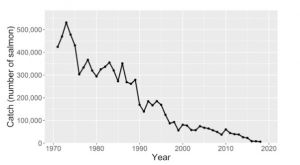 If in 2000, for example, the then trend lines for both returns and spawning stocks had been extended forward (assuming that catches would not increase) then the number of returning salmon would have equated to the size of the spawning stock by 2010, which is exactly what has happened. 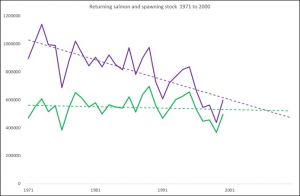 Yet, since the year 2000, a total of 492,970 salmon have been caught by rod and line and subsequently killed. The equates to the then size of all of the spawning stock. If the fish had remained alive, might the state of the stock today be in better shape? We will never know.

Although the number of fish returning to Scottish waters has been falling for many years – how often has it been said that in the 1980s, 20% of migrating salmon returned to Scottish waters but now the figure is less than 5% – the wild fish sector seemingly remained unconcerned. This is because since the 1950s, the catch of wild salmon by rod and line across Scotland increased to 2011. This can be seen on the latest Marine Scotland graph from the report on catch statistics. 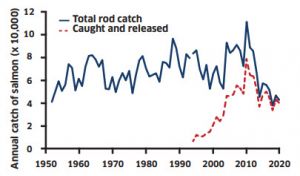 The fact that catches, mainly from the larger east coast rivers, increased has been extensively used as proof that salmon farming has damaged salmon stocks elsewhere. The wild sector has not only misled itself on that issue but has also misled itself into believing that increasing catches over many years have been an indication that wild salmon stocks have been in a good state, when clearly, they have not been.

The Marine Assessment 2020 document acknowledges what has actually happened. The graph of total catch above shows that catches had declined from the 1970s. This is because netting stations closed due to poor catches or were bought out by rod and line interests. This mean that more fish were entering rivers, even though less fish were returning overall. However, by 2010/11, the buffering effect of these extra fish diminished as numbers of returning fish declined further and the spawning stock went into decline. The MA2020 also highlights that the not only have the number of fish returning declined, but those fish that do return are smaller and hence produce less eggs, further exacerbating the declines.

Yet, even in 2021, anglers are still allowed to kill this declining resource for sport.

In 2015, Marine Scotland somewhat belatedly, introduced a system of assessing the conservation status of all the 109 fishery districts in Scotland. Districts assigned a Grade 1 or 2 conservation status allowed anglers to kill fish that were considered excess to the spawning requirements. However, anglers weren’t very happy. There were complaints that different rivers within the same fishery district would have very different conservation status and thus in response to appeals, the number of assessments has increased from 109 to 173. This has meant that one assessment area could be a small stream and another, one of the larger fishery districts. Thus, they no longer can be compared because they are no longer comparable. It also means that it is impossible for independent monitoring of the impact of the classification on each system due to the way that rod catches are reported. The current system has been refined to protect the privacy of riparian owners rather than the interests of the fish. To date, I am aware that at least 65 salmon have been killed in areas that are classified as Grade 3, which is supposed to be catch and release only. The number is likely to be much higher but there is currently no way of finding out.

The separate assessment of these 173 rivers and fishery districts ensures anglers can continue to kill fish rather than return them even though the overall picture for Scottish salmon is dire. The MA2020 document says that the main driver of change occurs in the marine environment yet also says that Atlantic salmon are subject to a number of pressures and disentangling the causes of changes in stocks is extremely challenging.

Given that the only working group on pressures that was set up and reported concerned salmon farming, and very little else seems to have been done since suggests that disentangling the causes has hardly progressed at all. This is not surprising given that many in the wild sector believe that salmon farming is to blame despite acknowledgement by SEPA to the Scottish Parliament’s REC Committee that salmon farming is not responsible. Unfortunately, there doesn’t seem to be much interest in the real causes of the wider collapse of stocks, which is perhaps why, the long-awaited Scottish wild salmon strategy has yet to materialise.

Doing the maths: The Marine Assessment 2020 document for salmon leads with a key message that approximately half of assessed stocks (95/193) are in poor conservation status. 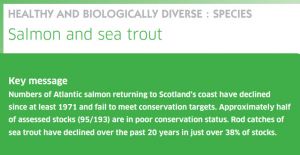 This equates to 49.2% of assessed stocks falling into grade 3. Figure 4 of the document states that these numbers are for the 2019 fishing season. The figure is a map of Scotland showing the areas by colour for each of the three conservation grades. It also states that it is a map of the 173 assessment areas.

When I read the document, I found these numbers somewhat confusing since the map shows 173 assessment areas but the key message claims that there are 193. Clearly, there has been an error and I asked Marine Scotland Science for clarification, and it seems this peer-reviewed document has suffered a typo. This sometimes happens. I am guilty as anyone of suffering from typos especially helped by predictive text. So instead of 49.2% of stocks being in poor conservation status, the figure should be 54.9% except I believe that this figure is incorrect too.

The annual conservation gradings are published on the Scottish Government website and includes all the data from 2017 onwards when Marine Scotland Science moved from grading fishery districts to any area, river or catchment that anglers wanted reviewed. I have gone through the grades for 2019 and for the two subsequent years.

Firstly, I have counted the number of assessed stocks for each of the three grades for all three years. My first observation is rather than being 173 areas as stated in the MA2020 document, there are in fact 174. The following table shows the numbers I counted and where they differ from MSS, their number is the one in brackets.

In addition, the MSS table includes a further 8 areas for which no individual data is held, and these remain as Grade 3 category, however, they are not included in the Grade 3 category count. This means that for these three years there are a total of 182 stocks.

For the year 2019, the percentage stocks that have a poor conservation status is 56% and for the two following years, 60.9% and 62% respectively.

The Marine Assessment 2020 for Salmon and sea trout was only published a few months ago and is still valid, yet in this short time, the reality is that the key message is that rather than half of salmon stocks being in poor conservation status, the figure is approaching two thirds.

Must we wait for all assessed stocks be in a poor conservation status before the wild fish sector drops its fixation on salmon farming and starts to address the real issues. Killing fish for sport could be stopped now to ensure that every returning salmon has the chance to breed and produce the next generations.

Economics:  Alongside the Marine Assessment 2020 document for salmon and sea trout there is another document dedicated to Salmon & sea trout fishing. The wild fish sector always maintain that salmon angling is vital for the rural economy as well as for safeguarding salmon’s future. The problem is how low does the conservation status of Scottish salmon stocks have to go before rod angling suffers the fate of net fisheries.

The document states the scale of recent declines have been undoubtedly influenced to some extent by drought conditions in many rivers but that ICES have identified that the pattern of the decline is mirrored in other countries. It also suggests that recent low catches reflect a continuation of a real decline in salmon numbers as well as a decline in the value of salmon fishing to the economy.

The MA2020 document states that there is very little information as to the contribution of salmon and sea trout fishing to the economy, but that the sectors future depends on the status of the stocks. The document however does give an assessment on the future economic trends for the sector. It should be a sharp reminder for those who oversee the sector. 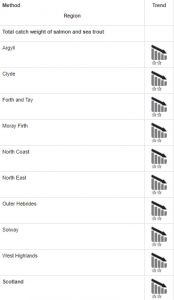