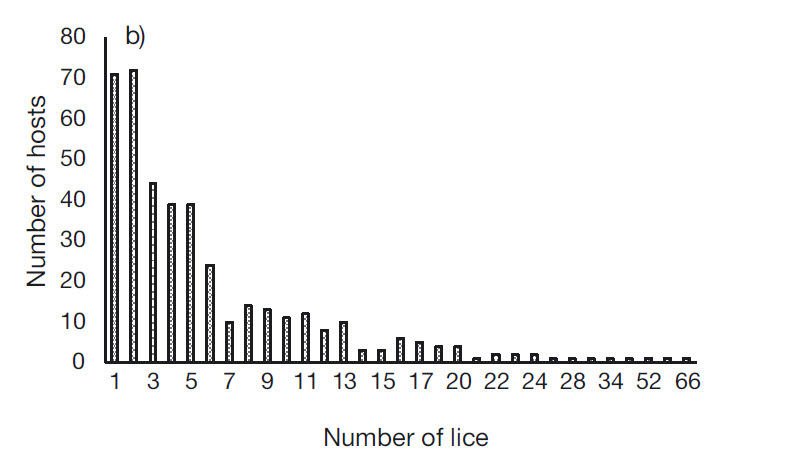 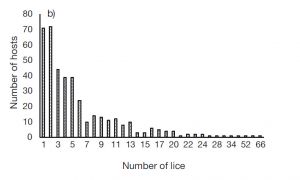 New Lice Paper: In reLAKSation no 1019, I asked for some evidence that salmon farming is impacting on wild fish stocks around Scotland. As expected, whilst the wild fish sector is very vocal about salmon farming, they remain strangely silent when it comes to providing evidence. I did, however, hear from one leading salmon conservation scientist, but not in response to my commentary. It was a spam mail from a dubious address. I did mail the spammed scientist to make him aware and immediately heard back with a salutation addressed to Nigel saying that all was now sorted and that he was free to go fishing from next week. I replied saying he was mistaken, that I was not Nigel, but would be happy to discuss the plight of wild salmon stocks. I am still waiting for a reply.

And there-in lies the problem. However much they claim that conservation is important. It really is all about the fishing. Wild stocks are in decline and whilst the focus is maintained towards salmon farming, then the activities of the wild fish sector are not put under scrutiny. This is the simple reason why the wild sector does not want to hear that salmon farming has no real impact on wild fish stocks.

Meanwhile, angler and anti-salmon farm campaigner, Corin Smith, who prompted my comment in reLAKSation no 1019, has posted that sea lice ‘are a huge problem for the wild fish on the other side of the feedlot nets. The wild fish have no protection at all and are infected at levels way beyond what would occur naturally. Which is the main reason wild salmon and sea trout stocks have declined so much on the West coast of Scotland, where salmon feedlots are located.’

Firstly, according to Marine Scotland Science data, salmon and sea trout stocks have not declined so greatly on the west coast because the numbers were never huge anyway. Here again, Mr Smith is making claims that wild fish are infected with sea lice way beyond what would occur naturally without providing any evidence. Instead of taking pictures of farmed salmon, perhaps he might like to direct his efforts to photographing large numbers of wild fish with abnormally high lice loads.

His comments coincide with the publication of a new study investigating sea lice infections on wild salmon and sea trout. The study has been published in ‘Diseases of Aquatic Organisms’ – https://www.int-res.com/abstracts/dao/v143/p119-127/

This study screened salmon and sea trout caught in a fish trap as they entered a river system. Over two different years, the researchers screened 361 salmon in one year and 275 in the second. They found the prevalence of sea lice was 41% and 60% respectively. The mean intensity across the study was 5.84 lice per fish with a maximum number of 66 lice. The fish were caught returning to freshwater and the researchers say that it is possible that lice had already become detached. They also said that limitations of the study meant that numbers of larval lice stages were not counted. About 40 fish were deemed to be showing severe damage whilst another 300 fish were considered moderately damaged.

The most interesting aspect of this study for me was that the distribution of lice amongst the fish hosts was aggregated. Whilst there are many papers about sea lice on salmon, very few refer to the distribution through the fish population. This paper acknowledges the aggregated distribution in which whilst there are fish with high lice loads, they are few in number whilst in comparison, most fish carried very few lice. In fact, if such fish were caught by anglers, they would be celebrating the presence of the lice as an indication of a freshly run fish.

When the Fisheries Trusts conduct seine netting for Marine Scotland Science to monitor sea lice, this aggregation is not acknowledged at all. The usual response is that the very few fish with high lice loads are claimed to be indicative of the whole stock. Give all the scientists involved in this work, this failure to acknowledge aggregated distribution simply reflects the accepted narrative against salmon farming.

However, the real significance of this paper, is not that the salmon and sea trout carry high loads of sea lice and the fish are damaged as a consequence, but that the study took place in the River Tamar. This 98 km river forms the border between Devon and Cornwall, and it enters the sea at Plymouth, which is at least 500 miles south of the nearest salmon farm and much further by sea.

Of course, the wild fish lobby will say that salmon migrating from the River Tamar will swim round Lands End and head north up the Irish Sea and then along the Scottish west coast where they will pick up lice from the Scottish salmon farms. From there, the fish will swim along the north coast and head past Orkney, collecting more lice, and on to Shetland picking up more lice and finally reaching the Norwegian coast where they will be exposed to lice from Norwegian farms.

Yet at least twenty rivers in the Republic of Ireland have been given the highest conservation classification from which migrating salmon must make a similar journey. In total 49 Irish rivers have been given the high classification, including rivers in the heart of the salmon farming area. If fish from the Tamer are picking up lice on their migration north, then why aren’t salmon from Irish rivers?

Finally, the authors of the new lice paper have noted that the combined prevalence of sea lice in sea trout was significantly higher in sea trout than in Atlantic salmon. Unlike salmon, sea trout do not undertake an epic migration north and instead tend to remain in the local area, although there are examples where sea trout have been found much further afield. These fish have not passed by any salmon farms so perhaps, these numbers are typical of natural infestation of salmonid fish, but we have become so accustomed to salmon farming being cited as the source that even people in the salmon industry have come to believe that they are the problem.

Minor: I recently referred to a paper resulting from a collaboration between the head of the Norwegian salmon expert group and a protégé of a well-known Canadian salmon activist. This paper suggests that too many sea lice can kill out-migrating salmon smolt and as a result fish remain at sea rather than return as grilse and in turn this affects the makeup of the whole stock. This paper was published in Theoretical Ecology.

Now, in something that I have never seen before, Dr Vollset has tweeted again that their ‘model’ suggests that the effect is only minor. 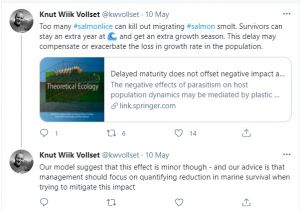 It is a pity that other authors have not also admitted that the impacts on wild fish from salmon farming that their models show are also just minor or just theoretical. We could than have a much more honest debate.

Afon: For my first degree, I attended university in Wales. At the time, the Welsh language was a complete mystery to me. Tutorials sometimes descended into baffling bilingual exchanges. Whilst the language was confusing, what is not, was that wild salmon numbers in Welsh rivers are in serious decline.

According to the Daily Express, the latest Environment Agency report found that salmon stocks in Welsh rivers are in serious decline. However, it is not just Welsh rivers where the problem lies. Salmon are also in serious decline across England. In total 61 out of the 64 principal rivers in England and Wales are listed as ‘at risk’ or ‘probably at risk’. This is reflected in the catch data which has fallen by two-thirds since 1988.

The Missing Salmon Alliance say that Government agencies in both England and Wales have plans in place to help wild salmon but MSA say action is needed urgently. Their spokesman Stuart Singleton-White said we cannot wait any longer and salmon cannot either.

The MSA say that rivers are under siege from agricultural fertilisers and pesticides, overflowing sewage, climate change and general pollution. Salmon also face overfishing by man and predators. What the MSA don’t say is the decline is the result of salmon farming. Perhaps, the reasons for declines in Scotland, especially on the east coast, may have more in common with the rest of the UK rather than what is happening on Scotland’s west coast.

Its mental: Scottish Television (STV) recently reported that salmon fishing on the River Tay was in full swing as restriction ease. David Godfrey, a ghillie at Cargill, is said to be happy to be back on the river surrounded by fellow anglers. He said that everybody’s talking to me about how great it is for their own mental health to get back out and socialise a bit with people and catch some fish.’

Given that Fisheries Management Scotland has called for wild salmon to be declared a national priority, it must be of concern that the link between mental health and the return of anglers to the river is now being repeatedly emphasised. The need to safeguard wild salmon stocks as a national priority should not be linked to the welfare and mental health of anglers. Millions of people who endeavour to ensure their mental status has not been compromised during lockdowns don’t feel the need to go out and catch salmon and sea trout. It is possible to improve mental status by just being out in the countryside or by partaking in other physical exercise than trying to catch a fish.

If fishing is the only option, then anglers should consider visiting a put-and-take fishery rather than engage in fishing that impacts on stocks of wild fish.  A recent issue of Fly Fishing and Fly-Tying magazine included an advert from Cobbinshaw Angling Association in West Lothian offering membership to fish the 240-acre Cobbinshaw Reservoir. This is stocked with 13,000 trout a year of minimum weight of 2lb. I regularly pass by this fly-only fishery when travelling by train to Edinburgh and can see that this must be a better model for fishing than impacting wild fish on their return to Scottish rivers to breed.

I mentioned previously that angler’s mental health was raised during one of the infrequent meetings of the wild salmon strategy group. The group should be considering the interests of the salmon not the anglers as part of this strategy review. However, it doesn’t take much to see that any possible recommendations will do little to enhance the status of wild salmon because the majority of those in the group have a vested interest in maintaining the status quo. The elephant in their room is whether angling should be curtailed or even banned, and this is just not going to happen. The angling lobby is just too dominant in these discussions for any real change to be forthcoming.