Missing: The Missing Salmon Alliance states loudly on its website that wild Atlantic salmon are in crisis.

Now this group of ‘conservation focused’ organisations is planning to restore salmon to a west of Scotland river catchment. The Alliance says: ‘Fisheries managers and researchers across the UK have developed a suite of approaches which can improve habitat and increase production of salmon. The Missing Salmon Alliance is discussing, with its partners, the opportunity to take this knowledge and apply it at a catchment scale to a west coast river.’

I can only wonder that given this suite of approaches, why Atlantic salmon are now in crisis? Why haven’t these approaches been applied to catchments across all of Scotland already?

The identity of this west coast river has not yet been revealed but given that some of the members of the Alliance have objected to new salmon farm developments because of the alleged threat to wild salmon, then it would be surprising if the river catchment is inside the ‘Aquaculture Zone’. However, if that was where the river was located, then surely, they would consider that they were putting themselves at a disadvantage from the outset. I will just have to wait like everyone else to find out.

Of more interest is what this suite of approaches will entail. On initial examination improving the river’s habitat to match salmon’s needs would be one approach, but at the same time, there need to be salmon in the river if they are going to breed. Even if the stock is extinct, there are examples of natural recolonisation, such as the River Mersey, but this proved to be a long process. The alternative is restocking, which currently is a contentious issue.

It was expected that Marine Scotland Science would begin a consultation process on their new stocking policy for Scotland at the end of last year, but this has so far failed to materialise. In simple terms, the policy is to ban restocking to improve the angling, allowing only mitigation or conservation stocking if a river can be shown to require intervention to maintain stock. However, when stocking is approved it must be only with eggs or unfed fry. Stocking is not permitted if the fish have been partially reared because MS believe the fish will have become domesticated.

Presumably, if the Missing Salmon Alliance wish to restock this river, they will need the necessary permissions from Marine Scotland. However, they should be very wary about adopting this strategy.

Back in 2016, the Wild Trout Trust reported that such mitigation stocking has been used to offset pressures on fish stocks despite scant data to support its efficacy. They highlight one long-term study in the Girnock Burn, part of the intensively studied research catchment on the Aberdeenshire Dee. They referred to a paper published in 2015 which presented the findings of an experimental conservation stocking programme designed to increase the freshwater production from a declining population of spring salmon. The stocking programme was in response to a 30-year decline in returning females, culminating in three successive years when egg numbers were estimated to be considerably lower than the threshold considered necessary to sustain production. Despite stringent adherence to strict stocking guidelines, the results indicated that the stocking programme failed to increase salmon production.

Given that Marine Scotland are planning to introduce a new policy on stocking, the question is whether they are aware of the failure of this stocking programme. The answer is of course yes because it was Marine Scotland that undertook this stocking programme! (Can Conservation Stocking Enhance Juvenile Emigrant Production in Wild Atlantic Salmon – Bacon, Malcolm, Fryer, Glover, Millar and Youngson, 2015 – Transactions of the American Fisheries Society 144: 3, 642-654).

Meanwhile, the type of stocking undertaken by the River Carron Restocking Programme will be banned under the new rules as fish are raised to various sizes before releasing into the river. According to Marine Scotland Science, these efforts mask a natural improvement in salmon numbers in the river. However, there is a simple answer to that which is if salmon stocks in the River Carron would have naturally recovered, then why have not other rivers on the west coast shown a natural improvement too. I can hear the shouts now from the wild fish sector saying that salmon numbers have declined across the west coast because of the influence of salmon farming, yet the River Carron has shown a significant improvement despite emptying into the sea close by one of the biggest aquaculture hubs on the west coast. 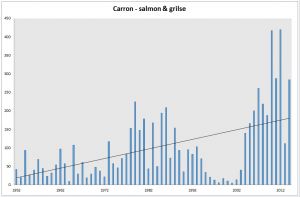 I very much hope that the river catchment that the Missing Salmon Alliance have selected is in the heart of the Aquaculture Zone as it will be interesting to see how their suite of approaches, which won’t include restocking with larger fish than unfed fry, as well as their expertise, will fair, given the range of pressures that Atlantic salmon face today.

Bye Bye: After joining Fisheries Management Scotland as Interactions Manager, in July 2020, Polly Burns has handed in her notice. She is off to join the Marine Stewardship Council.

Fisheries Management Scotland say that Polly has made a huge difference in their work on aquaculture interactions. My understanding of the role was to help improve the relationships between the two sectors, but this does not seem to be what has happened with Polly taking the lead in objecting to new farms such as at Kilbrannan Sound. I am not sure that using taxpayer’s money to pay for objections to new salmon farms is how this role was conceived.

In fact, this position was ill-conceived from the outset and Marine Scotland should now consider that Polly’s departure is a natural break to withdraw their funding, even though FMS have already started the recruitment process. This role is redundant because any interactions are highly overstated.

It seems that in return for a salary of £45-47,000 it would be an advantage if the applicant had a good understanding of the fisheries management sector and some familiarity with interactions between fisheries management and finfish aquaculture. Presumably, if they had some real knowledge of these interactions, they might be worth a lot more than £47,000.

However, as FMS only see it an advantage to have this knowledge, the applicant will require some training. It shouldn’t take long to explain the basics that as the sports fishery sector have caught and killed all of the salmon in Scotland, they need to find someone to blame and guess who gets to be the leading scapegoat? Salmon farmers, of naturally.

If FMS believes otherwise, then they should be ready to provide some hard evidence instead of making the same old unsupported claims. FMS have recently submitted a seven-page objection to the expansion of a salmon farm site. On page 2, they state that ‘Across Scotland, wild salmon populations are in crisis’ yet seemingly, rather than address this nationwide crisis, their emphasis remains on salmon farming even though anglers fishing rivers in the West coast aquaculture zone have never, on average, caught more than 10% of the total Scottish catch. This means that 90% of the wild salmon in crisis come from rivers outside the salmon farming area.

Perhaps rather than appoint another interactions manager, FMS really need a crisis manager, who can spend time properly assessing why wild salmon in Scotland are in such crisis.

Publicity stunt: Noel Hawkins, a former fisherman and marine conservationist, is quoted in the paid for anti-salmon farming double page spread that appeared in the Herald newspaper last weekend. He said, ‘We don’t want to basically look out at a factory.’

Mr Hawkins’ statement shows the theme of the advert for what it was – plain straightforward NIMBYism.

Although the text mentions sea lice, disease and waste, these NIMBY’s fail to provide a shred of evidence to back up their claims. Instead, they refer to comments made during a three-year-old Parliamentary inquiry despite the fact that the Rural Economy Committee revisited the issues as recently as last November. At that meeting SEPA’s Peter Pollard clearly told the MSPs that sea lice were not responsible for the decline of wild salmon, as implied in this advert.

Noel Hawkins is less well-known than some of the other people who appear in the advert. Mr Hawkins features in a short video from 2013, which was part of a Marine Protected Areas campaign https://www.youtube.com/watch?v=0WXvg7wUlhM&t=15s.  It is interesting that he expressed concern that all fishing could be banned in the proposed MPA, yet he objects to the inclusion of a salmon farm. It was fishing by trawl and dredge that brought about a move to MPAs, not salmon farming.  There is more about Mr Hawkins and his interests at https://www.holidayscottishhighlands.co.uk/things-to-do-ullapool/ where it explains that Mr Hawkins now works for the Scottish Wildlife Trust. Rather surprisingly, the Trust was not one of those supporters listed in the advert.

Another organisation which does not appear to support the advert is the Coastal Communities Network (CCN), despite their representative John Aitchison featuring in the main article. CCN have 18 member organisations and instead of listing the umbrella organisation, eight of the members are listed as supporters of the advert. Maybe the other ten were not as persuaded that salmon farming is something that needs to be highlighted. Of course, listing seven more backers is intended to make the list of supporters more impressive than it really is.

The leading article states that a large group of conservationists take a different view (to the narrative put forward by the salmon farming industry). Yet, this group is not as large as it might seem. Firstly, other than Noel Hawkins, the advert features the same small group of people – Jon Aitchison, David Ainsley, Sally Campbell and Ian Dobb – all of who regularly feature in criticism of the salmon industry.

Their number of supporters is increased by unseen relationships. For example, Jean Ainsley, wife of David, is on the Board of Open Seas. Sally Campbell of the Creel Fishermen’s Federation is a long-standing campaigner on Arran. She shares her views on salmon farming in a video on You Tube https://www.youtube.com/watch?v=2DPXrWDLiTs during her fight against local farms.

The Sustainable Inshore Fisheries Trust (SIFT) shares an office with CCN and has Howard Wood of COAST as a trustee, in addition to Guy Linley Adams of Salmon & Trout Conservation, two organisations who have also supported the advert.

Finally, the advert states that conservationists believe that the future of Scottish salmon farming lies not in the sea but in land-based operations. David Ainsley, for one, believes that the Scottish Government should be supporting the development of such closed containment farms. However, whether he retains this opinion if these farms are sited along the west coast remains to be seen. Nordic Aquafarms have produced an image of how their new land-based closed unit will appear.

Would Mr Ainsley welcome 200-plus factory units on shore instead of the traditional net pen arrangement. If there was a land-based farm around Balvicar Bay, south of Oban would he point it out as a local attraction to his fee-paying tourist visitors as he sails past and out to sea. I’m guessing that it might even be enough to turn him from a conservationist into a NIMBY!