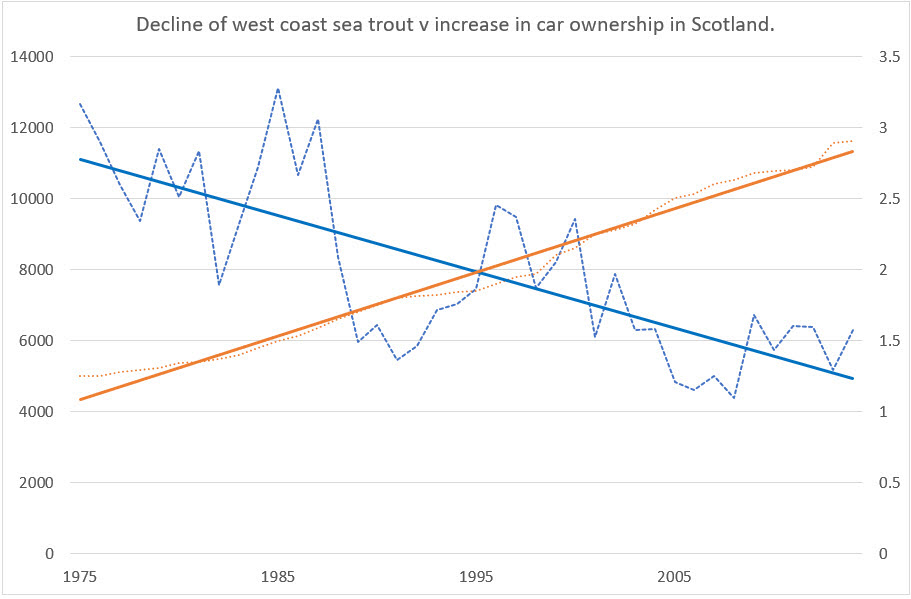 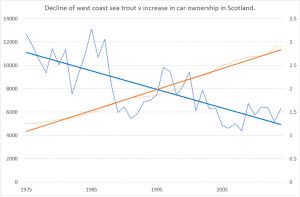 Tired old argument: At the beginning of last December, news broke that pollution from car tyres washing into watercourses is helping cause a mass die-off of wild salmon on the US west coast. The Guardian newspaper reported the chemicals, added to the rubber mix to stop the tyres breaking down, is leaching out and proving toxic to wild salmon.

Car ownership has risen greatly in recent years. Transport Scotland reports that by 2015 a record 2.9 million cars were licensed in Scotland. In 1964, just 0.9 million cars were on Scottish roads. It might be suggested that as more cars hit the roads, more and more tyres will have broken down and polluted Scottish waterways, resulting in increased deaths of migratory fish.

Certainly, when car ownership (in millions) is plotted against deaths of west coast sea trout, there is a clear correlation between the two.

This graph suggests the collapse of west coast sea trout could be due to the increased number of cars in Scotland. This doesn’t even take into account all those extra cars from the rest of the UK and Europe bringing tourists to holiday in the region. Clearly, if we want to safeguard the future of migratory fish on the west coast of Scotland, then we need to ban all car private travel and encourage a return of more accessible public transport.

I appreciate the wild fish lobby will dismiss the idea out of hand that increased car ownership has anything to do with wild salmon and that correlating wild fish declines to car ownership is simply playing with the data and this maybe exactly the case. Yet, this is precisely what the wild fish lobby do when they claim that sea lice from salmon is responsible for the decline in migratory fish stocks. They correlate wild fish declines with the growth of the salmon farm industry but lack any actual evidence to support their claims.

Yet, when salmon farm growth is plotted against wild fish declines in Scotland, the insertion of trend lines causes the graph to expand into negative production in order to obtain a correlative relationship. This makes no sense, just as the long-held belief that sea lice from salmon farms are a threat to wild migratory fish makes no sense. 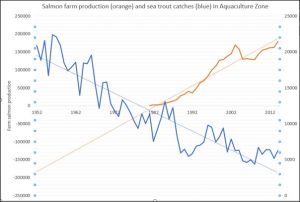 Regular readers of reLAKSation will know that since the Scottish Parliament’s Rural Economy Committee met on 18th November to be updated about the follow-up to their inquiry into the salmon farming industry, I have referred to the comments made by Peter Pollard from SEPA several times. Mr Pollard, SEPA’s head of ecology told the committee that SEPA do not think that sea lice from farmed fish are responsible for declines of wild fish over the decades. However, I seem to be the only person who is actually prepared to discuss this revelation. The wild fish sector remains deathly silent. I have written to FMS’s Marine Scotland funded Interactions Manager, Polly Burns, copied to FMS boss Alan Wells, asking for clarification on their position regarding Mr Pollard’s comments.

I suspect that FMS are reluctant to discuss SEPA’s view because they continue to object to salmon farm expansion. This is based on their concerns about the impact of sea lice from the farm on local wild fish populations. One objection, dated October 2020, states that:

In line with this threat (sea lice), we are concerned that the increase of almost 2,500 tonnes in the area will negatively impact nearby salmon populations. Putting this into perspective, we estimate that the proposed additional 2,500 tonnes of production will add an estimated 500,000 farmed salmon to the area. If sea lice levels are controlled at the levels which the company set out in their application (industry Code of Good Practice levels) up to 250,000 additional adult female lice may be added to the locality. We maintain that any increase in sea lice load resulting from increased biomass in the area will increase the threat to wild salmonids passing through the area. As detailed above the populations of these wild salmonids are already vulnerable.

Yet, according to Peter Pollard, such concerns are no longer relevant since sea lice from salmon farms do not adversely affect wild fish. As SEPA are one of the agencies regulating salmon farms, the silence from the wild fish lobby is no longer acceptable. Not wanting to have the debate is akin to burying their heads in the ground. The wild fish lobby were certainly keen to cite the REC Committee recommendations when it suited, but clearly, they hope that Peter Pollard’s remarks to the REC Committee will be soon forgotten. However, they have forgotten that they are not the only ones with a voice, and this is an issue that I am not prepared to let go.

Reporting: The Scottish Government’s Fish Farming Business (Reporting) (Scotland) Order 2020 will come into force on 29th March 2021. This means that salmon farms will have to report their sea lice counts on a weekly basis, even though, as SEPA have stated, lice do not have any bearing on the status of wild fish stocks. In a letter to the Government, dated 10th September, FMS wrote that they have been calling for site by site weekly publication of sea lice data in order to facilitate understanding of wild farmed salmon interactions.

It is interesting that they are keen that the salmon farming industry report data weekly, but we must wait for eighteen months for their catch data to be published. Why can’t proprietors report their catch on a weekly basis too? I don’t suppose that we will see such a proposal in the new wild fish strategy even though it will help a wider understanding of wild fish stocks. The problem is that the wild fish lobby think that they are the only ones to know and understand wild fisheries and that no-one else can.

It is also interesting that as we approach the end of January, we are still waiting for FMS to publish their scale sample study from last August. How long does it take to read a few scales and to plot on a map when and where the fish were caught? Perhaps, they don’t want us to know the results. Maybe, their findings don’t support their claims.

Quick visit: Viewers of the latest episode of the BBC nature programme, ‘A Perfect Planet’, which focused on the oceans, will have heard Sir David Attenborough say, in reference to the debris that followed the devastation of a bait ball that:

Part of a slow never-ending blizzard of organic waster hat eventually settles on the sea floor – but it doesn’t stay here forever.

He goes on to say how it provides the nutrients for microalgae starting the cycle of life again.

Critics of the salmon farming industry argue that the waste they produce is a form of pollution that causes illness in wild fish and dead zones through smothering of the seabed (S&TC 2017).

The problem is that these critics take a simplistic view believing that a mountain of waste, of a similar nature to human excreta, forms under the pens polluting the marine environment. Firstly, fish waste bears no resemblance to human waste and secondly, 8.5 trillion fish deposit their waste in the world’s oceans and seas as part of the natural nutrient cycle. As David Attenborough rightly states, the waste is reabsorbed into the marine ecosystem.

A couple of years ago, Salmon & Trout Conservation asked David Attenborough to feature in a short video highlighting the threats to wild salmon. They made sure his script included criticism of salmon farming, but he didn’t mention the waste produced. However, whilst he did include salmon farming, as might be expected in a video commissioned by S&TC, he also mentioned the threats of dams, pollution, over-exploitation, and climate change. Clearly, Sir David, unlike S&TC, understands the workings of the wider ecosystem and that as he points out in the BBC programme, organic waste, no matter its origin, is something that does not remain forever.

Question: I have a question for Alexandra Morton. She describes herself a Dr and has authored or co-authored sixty-seven scientific papers over thirty years of monitoring wild salmon and especially sockeye salmon stocks. The local communities have certainly listened to her advice claiming that salmon farms have been a disaster for Fraser River sockeye salmon and that they need to be moved from net pens to onshore closed containment.

My question is simply that if salmon farms are responsible for the decline of wild sockeye salmon in the Fraser River, then what is the cause of a collapse of sockeye salmon stocks in parts of Alaska?

Last week, the Anchorage Daily News reported that the Cordova City Council unanimously passed a resolution asking the State of Alaska to declare the 2020 sockeye run at the Cooper River and Prince William Sound a disaster. The resolution also urged the state and federal governments to declare a ‘condition of economic disaster in Cordova’. This is because salmon runs have been so poor that there are just slim pickings for fishermen. The Anchorage Daily News reports that the town of Cordova (pop 2,500) will not be the last town to declare that the fishing has been a disaster. The sockeye fishery at Chignik has also remained closed; with so few fish returning that there is concern that there will be enough fish spawning to maintain a viable stock. The local fisheries Manager has declared that it’s looking like one of the worst years in Chignik history.

Cordova is approximately 2,000 km north of Vancouver and about the same distance to the nearest salmon farm. As salmon don’t swim south to feed, there is no way that the problems in Alaska can be due to the influence of salmon farms. However, it is entirely possible that the Fraser River sockeye might have declined for the same reasons that have caused the current problems in Alaska. This similar trend of salmon returns in Alaska, British Columbia, and the States to the sooth is not a new revelation – the Cohen Commission that looked into the 2009 poor return of sockeye salmon to BC’s Fraser Rover note the same trends in neighbouring US States. I would be very interested to hear from Ms Morton as to the causes of declining salmon stocks in areas where there is no salmon farming.

The assessments of localised changes to salmon stock in Canada are very reminiscent of those in Scotland and Ireland. In Scotland during the 1970s and 80s, local wild fish catches appeared fine to local anglers even though stocks had been in slow decline over many years. When the declines became significant enough to be noticed, those on the ground asked what had changed to cause these declines. Pointing at the ‘new industry’ – salmon farms stood out as obvious targets to blame and this is exactly what happened. They blamed the obvious without bothering to investigate or consider anything else including their own historic blunders. This has meant that the focus has been on salmon farms for years whilst the real culprits have been ignored and, more importantly, have never been addressed.