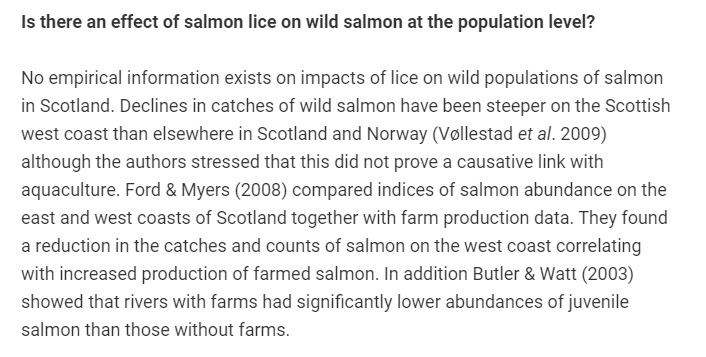 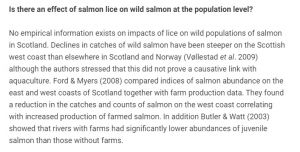 No difference: The demands of Christmas on my day-to-day work meant that I missed commenting on an article that appeared in Fish Farming Expert in December. Marie Lie Larsen of the Fridtjof Nansen Institute had presented the findings of her study about stricter sea lice levels on salmon farms to the annual TekMar conference in Norway.

Dr Larsen and her colleague had studied the consequence of more stringent lice levels on farmed and wild salmon in Norway. This is relevant to Scotland because of changes to the legislation about lice levels affecting the Scottish industry.

The study involved examining data collected from 2012 to 2019 and identifying the different impacts both inside and outside salmon farms.

Firstly, the enforcement of stricter lice levels on salmon farms meant that the fish had to be treated more frequently either with existing techniques or newly introduced delousing methods. The consequence of these increased treatments was increased concerns about fish welfare and sadly, increased mortality.

Certainly, we have seen increases in mortality in Scotland too because of tighter regulations and the need to treat more frequently to reduce on farm lice loading.

However, the key finding of Dr Larsen’s study, in Norwegian traffic light zones 3,4,5 and 7, is that they found no observable effect on the infection pressure on wild fish. Simply, increased numbers of lice on farms do not cause increased infestation of sea lice on wild fish.

This news comes of no surprise to me. For many years, I have been a lone voice saying that sea lice on salmon farms are not the reason why wild fish stocks are in decline. In November, Peter Pollard from SEPA told the REC Committee exactly the same thing. How much more evidence is required before we can move on and address the real issues?

For many years, anglers and the wild fish lobby have blamed salmon farms for declining stocks based at best on circumstantial evidence.  Even now, Marine Scotland continues to post a summary of the science of sea lice on the Scottish Government website that implies sea lice from salmon farms is a problem.

The summary even states that the research did not prove a causative link so why is it even mentioned? More than once I have asked Marine Scotland Science to explain but they simply evade the question. Regular readers may remember that I have analysed both the first two papers mentioned and cannot find any evidence to support the author’s claims.

Whilst this summary states that there is no empirical information on the impacts of lice on wild salmon populations in Scotland, Marine Scotland Science spent £600,000 on a three-year study that failed to produce any results, let alone results that supported the view that sea lice have a negative impact on wild fish.

Now Marine Scotland are running the West Coast Tracking Project with the Atlantic Salmon Trust and Fisheries Management Scotland to identify migration routes for west coast salmon. Fisheries Management Scotland state on their website that there is a need to understand the migration patterns of west coast salmon to help protect them from elevated sea lice levels.

Perhaps, like Marine Scotland, FMS need to update their website. As Peter Pollard clearly told the REC Committee, sea lice are not the reason for the decline of wild salmon stocks. Thus, there is no need to waste more than £750,000 on a tracking study that does nothing to help protect wild salmon.

The FMS website states that ‘we now have an opportunity to stop talking about it and get answers.’ They are mistaken, as the time has come to start talking and discuss the issue in depth. In my experience FMS appear only willing to talk to people who say the things they want to hear. I had hoped this might improve once the Marine Scotland funded Interactions Manager was in place, but sadly there is no change.

In part this is understandable. The narrative that salmon farms have destroyed wild stocks has been promoted for so long, it will be difficult for some to now accept that they may have been wrong.

Meanwhile, I hope someone at Marine Scotland recognises the senselessness of spending a quarter of a million pounds on a project that will do nothing to safeguard iconic salmon stocks.

Stellar findings: I am grateful for another of my readers for sending me an article that appeared in the publication of the American Fisheries Society. This is titled ‘Has Stellar Sea Lion predation impacted survival of Fraser River Sockeye Salmon’.

The article, by Carl Walters and others from the Institute of Oceans and Fisheries at the University of British Columbia, begins by highlighting that the Cohen Commission had been established to investigate a decline in productivity of sockeye salmon that began in 1990. The inquiry involved broad scientific analysis of possible causes for the decline. The final report included the following from Justice Cohen:

‘Some I suspect, hoped that our work would find the ‘smoking gun’ – a single cause that explained the 2-decade decline in productivity. The idea that a single event of stressor is responsible for the 1992-2009 decline in Fraser River sockeye is appealing but improbable.’

Unfortunately, some people have made it about a single issue and consequently, we have seen the decision to close farms in the Discovery Islands because of the mistaken view that salmon farms are the reason why salmon stocks have declined.

This study, published last year, highlights that there is parallel between the current decline of sockeye salmon and previous research about the decline of Coho and Chinook salmon in the Salish Sea. That study focused on ‘bottom-up’ ecological explanations such as oceanic changes and questions about food supplies. There was much debate but no conclusion.

Work by Olesiuk (1999) on harbour seals led to a recognition that a ‘top-down’ or predation hypothesis may have more validity, and this prompted the study reported by Walters and others. In fact, Olesiuk told the Cohen inquiry that the Stellar Sea Lion population could be a growing problem. The estimates for Stellar Sea Lion numbers around the Fraser River has been put at about 18,000 individuals that have a potential consumption of 1.4 million sockeye salmon. The total number of Stellar Sea lions in BC has been put at around 33,000 which is estimated to consume in excess of 300,000 tonnes of fish each year. Walters and his colleagues say that this is greater that the total catch of capture fisheries and aquaculture combined.

The problem with salmon farms is that they are usually visible, whilst many of the sea lions haul out in more remote locations out of sight of many. It is easier to blame salmon farms because their visibility near the shore, than look for reasons that are not so obvious.

The Cohen Commission considered a whole range of issues however, it seems that the Minister has found that salmon farms can be made into the smoking gun that makes it look like she is taking action to safeguard the future of Fraser River Sockeye. Unfortunately, it is likely that she will be long gone by the time the real consequences of her actions become apparent.

Feedback: The London based organisation Feedback continues its fascination with the Scottish salmon farming industry with the publication of a new report with recommendations for policy makers in Scotland to develop a sustainable aquaculture industry.

Feedback’s objective is to transform the food system in order to secure nutritious and delicious food for all. However, I struggle to see how changing the salmon industry will achieve their aims. In fact, I can only conclude it will make no difference whatsoever, even if policy makers took on board their recommendations.

I have met the people from Feedback and written about them for Fish Farmer magazine. It seems their problem with salmon farming is that they have estimated that 460,000 tonnes of wild caught fish such as herring, sprat, whiting and anchovy are used in salmon feed. They say this is roughly the same as the amount of seafood purchased by the entire adult population of the UK in one year.

Feedback calculates that if some of the wild fish is used instead for direct consumption, alongside a reduction in salmon production, then the same level of omega 3 as currently provided by salmon farming alone would be made available to the public whilst leaving 59% of wild fish – around 273,000 tonnes in the sea.

Unfortunately, this plan is flawed. It is flawed for two simple reasons. Firstly, they assume that if more herring, sprat, whiting and anchovy was made available instead of being used for salmon farming, then it would be consumed by the public. What Feedback fail to appreciate is that most of the public are not interested in eating herring, sprat, whiting and anchovy and would rather eat salmon. Even with increased home consumption of fish during the pandemic, the UK public ate just 2,433 tonnes of herring, 74 tonnes of sprats and 997 tones of anchovy. Whiting doesn’t even feature in the statistics. By comparison, the public ate 70,304 tonnes of salmon and for added comparison, 64,735 tonnes of cod.

IF Feedback wants to change the system, then rather than attack the salmon farming industry, it needs to be working to persuade the public to be eating a greater variety of fish. Demand is the greatest driver of change, yet Feedback appear shy of trying to influence the public to change their consumption habits – or lack of them. To the best of my knowledge, the only attempt Feedback have made to influence change was to get a chef to cook a couple of lesser-known species and for the Feedback staff to sit round a table and eat it, which was of course videoed:

As it has only had 500 or so views, it clearly has made little impact on consumer behaviour.

The second reason why their strategy is flawed is that these forage fish species are not fished to supply the salmon farming industry. They are fished to produce fishmeal and fish oil for whoever wants to buy it. If salmon farmers remove the fishmeal from the feed it is simply bought by pig or poultry producers instead. 273,000 tonnes of wild fish will still be caught and used irrespective of the choices made by salmon farmers. It is not the salmon farming industry that Feedback needs to target.

When I met Feedback, I suggested that they consider targeting the pet food industry as globally nearly 3 million tonnes are fed to pet cats and dogs. Pet owners will be a much harder sell given that all pet owners want only the best for their animals, which is probably why the focus remains firmly on their attack of the salmon farming industry.

Feedback have recommended to policy makers that Scotland should invest in promoting shellfish instead of salmon. They say that given that only 6,800 tonnes of mussels and 4,000 tonnes of oysters are produced, there is scope to expand. They say that for every £1 million of value, the shellfish industry generates 23 jobs whilst the same figure is just 2 jobs in salmon farming.

What Feedback fail to recognise is that shellfish production would increase if there was increased consumer demand. This year, the UK public consumed 4,522 tonnes of mussels and 59 tonnes of oyster.

If Feedback wants to change the face of aquaculture in Scotland, it is not policy makers that need to be influenced, but the public. Perhaps they should mobilise their resources to help stimulate consumption rather than criticise an industry for producing what consumers actually want to eat.